I’m not the most confident when it comes to cooking seafood, that’s why we seldom do that at home. Even if we do, the cleaning and prepping would be done by Kevin because well, Seafood anatomy is largely foreign to me. However, after cooking beef and pork for 40 days, the routine just needs to be freshened up just a tad.

During the last groceries trip, I browsed through the frozen seafood section and picked up a pack of baby octopuses. They looked precleaned, which is awesome because I wouldn’t need Kevin’s help. And the first dish I thought of was the Teow Chew Meng’s plain octopus with chili sauce. Although the last time I’ve had this was years ago so I would say this dish is inspired by it, not in anyway a copy.

First of all, I think they steamed their baby octopus(es). I decided to go with boiling as its easier and quicker. Since they are so small, it won’t make much of a difference. Secondly, I dont exactly remember the sauce they used for this, so I went extra Teochew and made the chili lime sauce commonly used for Teochew braised duck. The hero is however the little bits of Crispy garlic, bringing the entire dish to life. My version of this has a fair bit of lard to bring up the fat ratio (otherwise it’s pretty much just protein).

This is super simple by the way with very small ingredient list.

Prep the octopus by separating the head from the tentacles, cutting them into smaller pieces. If you use fresh octopus, feel free to Google how to properly clean them. Give them a proper wash by rinsing them a few times.

In a pan, heat plenty of lard and slowly fry the mince garlic (saving a tablespoonful for the chili sauce) on low fire until golden. Then set aside until needed.

Add salt to a pot of water and bring water to boil. Once ready dunk the octopuses all in, and boil for about a minute. The smaller they are, the faster they cook. Once they turned solid white colour, take them out and drain all the water so they don’t continue to cook. Serve on a plate and drizzle generous amount of Crispy garlic (along with the lard) over.

To make the chili sauce, simply add everything to a food processor or a blender and blend til your desired consistency. Add a dash of boiling hot water to bring everything together. Or if you are like me who can’t stand rad garlic, you can even boil the sauce slightly to take off the raw edge (will need to add a bit water for that, it will boil off). 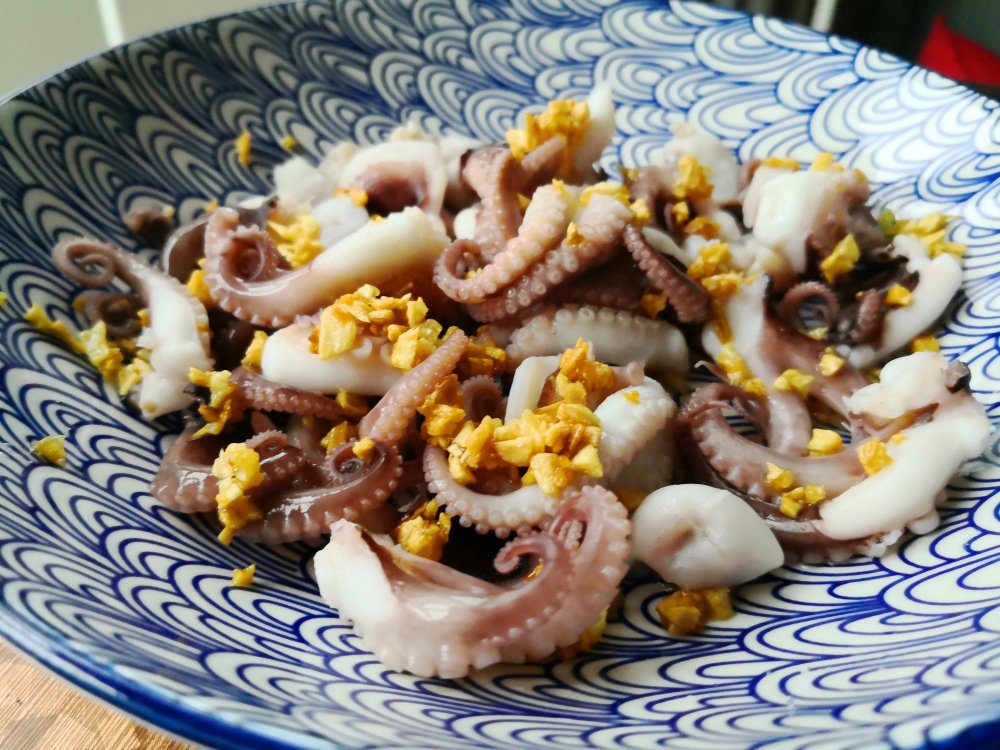 So that’s all there is to it! I love the crunchy octopus, the aromatic garlic, the tangy chili sauce, great combination!